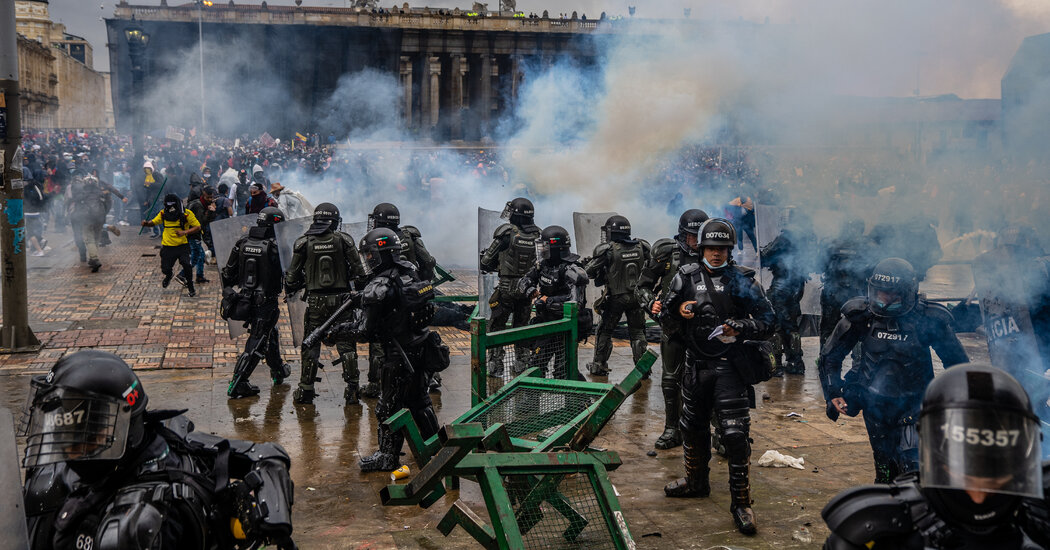 BOGOTÁ, Colombia – Among those killed are a ninth-grade student who went out to protest with his brother, an artist who was shot in the head while surrounded by cameras, and a teenager whose mother cries with anguish and pain, while saying: “Son, I want to be with you!”, in a video that has been shared thousands of times online.

At least 19 people were killed and hundreds more injured during days of protests in Colombia, in which tens of thousands of people took to the streets to demonstrate against a tax reform aimed at filling a fiscal hole related to the pandemic.

On Sunday, President Iván Duque He said that was withdrawing the current proposal and, instead, will seek a new plan that emerges through consensus. “Reform is not a whim,” he said, “reform is a necessity.”

On Monday, the country’s finance minister announced his resignation.

But those decisions have done little to quell public anger, and the demonstrations have morphed into a major national outcry over rising poverty, unemployment and inequality caused by the arrival of the coronavirus last year.

Latin America, and South America in particular, has been especially hard hit by the virus, and many countries in the region will face dire fiscal conditions if they do not implement reforms.

Duque was one of the first to try to tackle his country’s economic problems, but the public response does not bode well for other regional leaders, said Sergio Guzmán, director of Colombia Risk Analysis, a consultancy.

“This is one of those times when a key break is taking place in society,” he said. “People are fed up and the power of the streets awakens.”

The demonstrations have continued, in part due to anger, which is why various human rights groups they have denounced abuses by state security forces to try to control them.

In recent days, several cases of police abuse have been caught on video, including one in which a young protester is seen kicking a police officer on a motorcycle. The video shows how the agent responds by shooting the protester as he flees.

The protester was Marcelo Agredo, 17, a ninth-grade student who went out to march with his brother. He died shortly after, according to his father, Armando Agredo. The death was confirmed by the Defensoría del Pueblo, a government agency that investigates human rights violations.

“A kick is not to take a person’s life,” said Agredo, a 62-year-old retired taxi driver. “Let justice be done.”

In the midst of this outrage, the country’s former president, Álvaro Uribe, took to Twitter to say that Colombians must support “the right of soldiers and police to use their weapons to defend people and property” from “vandalism terrorism.”

Twitter deleted the message shortly after, saying he violated the rules “Regarding the glorification of violence.”

The protests began on Wednesday and by Monday at least 18 civilians and a police officer, Jesús Solano, had died, according to the Ombudsman’s Office. Among the dead was Jesús Flórez, 86, who died “apparently from gas inhalation.”

At least 540 police officers have been injured during the demonstrations, according to the National Police, while more than 100 buses have been destroyed or burned. Police said they had also identified nearly 17,000 people who were not complying with public health measures such as wearing masks.

The protests come just as the country is experiencing the deadliest moment of the pandemic, and the country has hit a record number of daily deaths in recent days.

Guzmán of Colombia Risk Analysis said there was widespread agreement that tax reform was needed to keep the country afloat, but that the government had waited too long to rescind the unpopular tax proposal, allowing anger, frustration and resentment that had built up since last year exploded.

“Now it’s much more about the way the government has run the country for two and a half years, it’s about the closures, it’s about popular discontent,” he said.

Colombia’s economy contracted 7 percent last year, while poverty increased from 36 to almost 43 percent of the population, according to figures released last week.

The tax proposal sought to raise tariffs on some everyday goods and services, while maintaining cash subsidies from the pandemic aimed at helping people in distress.

Ultimately, however, many people on the streets said they only saw tax increases, and a government they felt was ignoring their needs.

“They are leading us to hunger,” said Natalia Arévalo, 29, a protester in Bogotá. Arevalo, who sells clothing, said last week that the new closure imposed to curb the spread of the virus had drastically reduced its sales. “Now they want to take away what little we have.”

Some of the biggest demonstrations have been held in Cali, the third largest city in Colombia. On Sunday, Nicolás Guerrero, a young artist, was among the hundreds of people gathered in a northern part of the city. Suddenly shots rang out.

A grainy video, streamed live and watched by many, shows screaming and confusion.

Juan Gómez, a 27-year-old lawyer, was there and saw Guerrero bleed at his feet.

“It was horrible,” Gomez said. “I have never seen someone die before my eyes.”

“There is no proportionality,” he said about the force used in the street. “Has no sense”.

Gomez was on the phone on Monday. He said he was so upset that he planned to return to the streets later that day.

Sofía Villamil contributed to this report.

Julie Turkewitz is head of the Andes bureau that covers Colombia, Venezuela, Bolivia, Ecuador, Peru, Suriname and Guyana. Before moving to South America, she was a national affairs correspondent and covered the western United States. @julieturkewitz