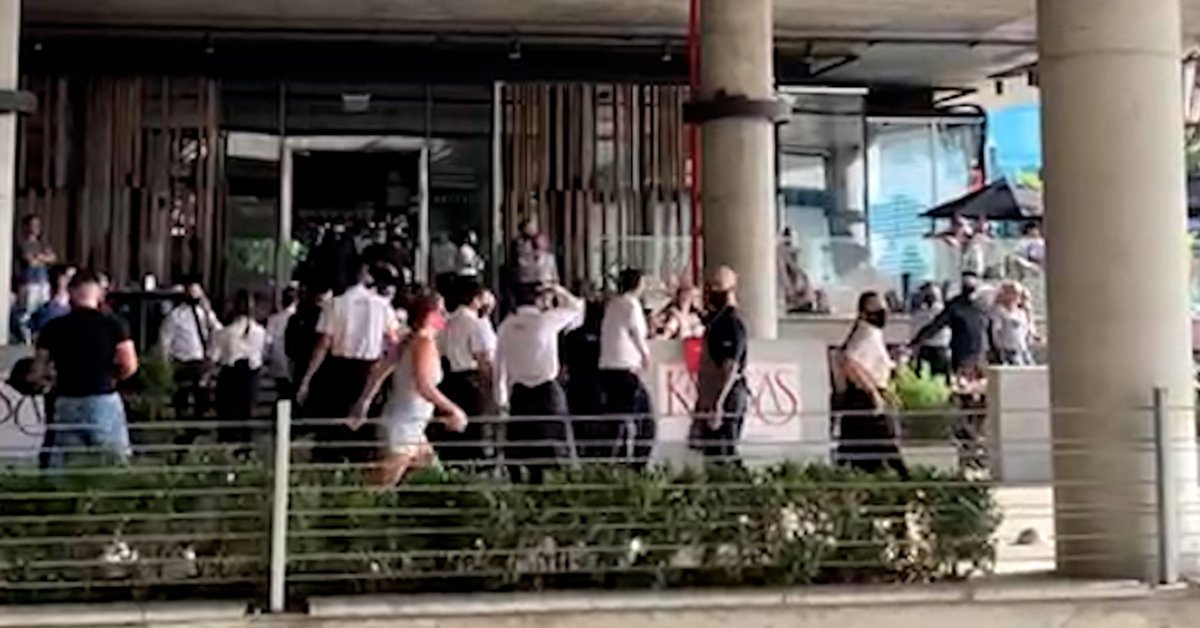 The video is barely 28 seconds long but the images are forceful and show a fierce fight that broke out on Sunday at noon between a group of customers and the waiters of a restaurant located in Vicente López.

The incident occurred in Kansas to the River, an American food place that stands on the ground floor of the Al Río Building, in Libertador 105. There are two versions of what happened.

According to the information that went viral on social networks, the trigger for the confrontation was an “unpayable ticket” that the diners received, so they ended up rebuking the waiter and his companions jumped to his defense.

“Yesterday in Kansas to the River, Vte Lopez. A group of idiots took the account. As they did not like what they were charged, they caught up with the waiters. One of the idiots threatens the waiters with two knives. The right hand that is eaten is glorious, ”Joaco Stahl tweeted.

Apparently, the details on the bill did not coincide with the consumption they had made and they complained badly about the large amount they had to pay and vented their anger against the worker.

Tweet from a user where he denounces what happened in Kansas to the River, by Vicente López

But other witnesses pointed out that the pitched battle began when A gypsy family who was eating in the place was enraged when they saw the arrival of other people from the same community with whom they had a dispute and the verbal attacks between them began.

When they noticed this situation, the waiters intervened to calm the spirits and invited both groups to leave the restaurant. What nobody noticed is that one of the diners took two knives that were on the table and began to threaten the workers who gathered at the door of the place.

While the man was wielding those bladed weapons and pushing the porters back, one of the workers appeared from behind and He knocked him out with a punch to the head. The entire sequence was recorded in a video that was shared on social networks.

In the midst of the second wave of coronavirus and the implementation of more restrictions to lower the number of cases, these people forgot the importance of maintaining social distance and crowded at the main entrance, shouting and shoving. Come b …, come shit “, someone is heard screaming in the filming.

There were no police officers at the scene of the events despite the fact that less than 200 meters from there is a detachment, right at the entrance of the Carrefour supermarket.

As he was able to reconstruct Infobae, the owners of the restaurant did not make any police report and before the telephone call made by this medium to delve into the details of what happened, they refused to make any statements. “We have nothing to say about it”, said a person who introduced himself as the restaurant manager.

The Kansas Grill Bar chain was founded in 1999 in the country and opened its first branch in the San Isidro district. It currently has 7 more rooms located in Palermo, Parque Leloir, downtown Buenos Aires, Nordelta, a delivery center called “pick up point” on Aráoz street, and Vicente López, who today became news for this fierce confrontation.

Germán Martitegui spoke of the rumors that romantically relate him to the owner of a well-known restaurant
Between taboo and fun: a Palermo restaurant makes penis-shaped waffles
Sudden crisis for Puerto Madero restaurants: only half will be able to survive the pandemic